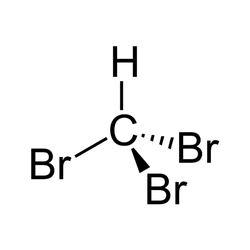 Leading Wholesale Trader of bromoform, iodoform, methyl phenylacetate, trifluroacetic acid, hydroxypropyl beta cyclodextrin and 4-methoxy phenacyl bromide from Mumbai.Bromoform (CHBr3) is a brominated organic solvent, pale yellow liquid at room temperature, with a high refractive index, very highdensity, and sweet odor is similar to that of . It is a trihalomethane, and is one of the four haloforms, the others beingfluoroform, , and iodoform. Bromoform can be prepared by the haloform reaction using acetone and sodium hypobromite, by the electrolysis of potassium bromide in ethanol, or by treating with aluminum bromide. Currently its main use is as a laboratory reagent.

Only small quantities of bromoform are currently produced industrially in the United States. In the past, it was used as a solvent, and flame retardant, but now it is mainly used as a laboratory reagent, for example as an extraction solvent.Bromoform's high density makes it useful for separation of minerals by density. When two samples are mixed with bromoform and then allowed to settle, the top layer will contain minerals lighter than bromoform, and the bottom layer will contain heavier minerals. Slightly less dense minerals can be separated in the same way by mixing the bromoform with a small amount of a less dense and fully miscible solvent 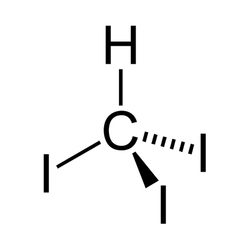 Iodoform is the organoiodine compound with the formula CHI3. A pale yellow, crystalline, volatile substance, it has a penetrating and distinctive odor (in older chemistry texts, the smell is sometimes referred to as the smell of hospitals, where the compound is still commonly used) and, analogous to , sweetish taste. It is occasionally used as a disinfectant. It is also known as tri-iodomethane, carbon triiodide, and methyl triiodide.

Iodoform is primarily used to treat minor skin conditions due to its antiseptic properties. It is also used in various human and animal disinfectant products, and in polarizing films for liquid crystal display or LCD chemicals 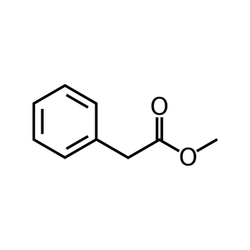 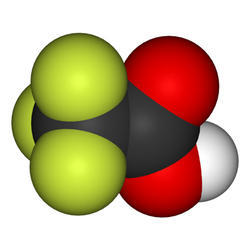 Trifluoroacetic acid (TFA) is an organofluorine compound with the chemical formula CF3CO2H. It is a colorless liquid with a sharp odor similar to vinegar, but stronger in acidity. TFA is an analogue of acetic acid with the three hydrogen atoms replaced by three fluorine atoms. The acidity of TFA is approximately 34,000 times stronger[2] than that of acetic acid due to the electronegativity of thetrifluoromethyl group. TFA is widely used in organic chemistry for various purposes.

TFA is the precursor to many other fluorinated compounds such as trifluoroacetic anhydride and 2,2,2-trifluoroethanol.[3] It is areagent used in organic synthesis because of a combination of convenient properties: volatility, solubility in organic solvents, and its strength as an acid.[7] TFA is also less oxidizing than sulfuric acid but more readily available in anhydrous form than many other acids. One complication to its use is that TFA forms an azeotrope with water (b. p. 105 DegreeC). TFA is popularly used as a strong acid in peptide synthesis and other organic synthesis to remove the t-butoxycarbonyl protecting group.[8][9] At a low concentration, TFA is used as an ion pairing agent in liquid chromatography (HPLC) of organic compounds, particularlypeptides and small proteins. TFA is a versatile solvent for NMR spectroscopy (for materials stable in acid). It is also used as a calibrant in mass spectrometry.[10] TFA is used to produce trifluoroacetate salts SAFTY:Trifluoroacetic acid is a corrosive acid but it does not pose the hazards associated with hydrofluoric acid because the carbon-fluorine bond is not labile. Only if heated or treated with ultrasonic waves will it decomposes into hydrofluoric acid. TFA is harmful when inhaled, causes severe skin burns and is toxic for water organisms even at low concentrations. TFA's reaction with bases and metals, especially light metals, is strongly exothermic. The reaction with lithium aluminium hydride(LAH) results in an explosion. 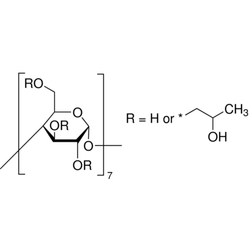 INFORMATION OF 2Hydroxypropyl β cyclodextrin:A cyclodextrin that allows easier diffusion of lipophiles across biological membranes.2-Hydroxypropyl-beta-cyclodextrin (EP, USP, BP, JP) Grade is the most widely used modified cyclodextrin. The compound has shown to change the physicochemical properties of lipophilic compounds when co-administered. 2-Hydroxypropyl-β-cyclodextrin functions by forming an inclusion complex with the compound being administered for easier diffusion across biological membranes, and its popularity can be attributed to its large 7 glucose unit cavity size. Some advantageous effects are reduction of negative effects, increased aqueous solubility and increased stability. The effects of 2-Hydroxypropyl-β-cyclodextrin have been observed to be dose dependent with both advantageous and disadvantageous results occurring at sporadic concentrations. The compound may also increase the antimicrobial effectiveness of chemical agents by increasing their release rate. Cyclodextrins are cyclic oligosaccharides consisting of 6, 7, or 8 glucopyranose units, usually referred to as α-, β-, or γ-cyclodextrins, respectively. These compounds have rigid doughnut-shaped structures making them natural complexing agents. The unique structures of these compounds owe their stability to intramolecular hydrogen bonding between the C2- and C3-hydroxyl groups of neighboring glucopyranose units. The molecule takes on the shape of a torus with the C2- and C3-hydroxyls located around the larger opening and the more reactive C6-hydroxyl aligned around the smaller opening. The arrangement of C6-hydroxyls opposite the hydrogen bonded C2- and C3-hydroxyls forces the oxygen bonds into close proximity within the cavity, leading to an electron rich, hydrophobic interior. The size of this hydrophobic cavity is a function of the number of glucopyranose units forming the cyclodextrin. The solubility of natural cyclodextrins is very poor. In the late 1960’s, it was discovered that chemical substitutions at the 2, 3, and 6 hydroxyl sites would greatly increase solubility. Most chemically modified cyclodextrins are able to achieve a 50% (w/v) concentration in water. Cavity size is the major determinant as to which cyclodextrin is used in complexation. The cavity diameter of β-cyclodextrins or β-glucopyranose unit compounds is well-suited for use with molecules the size of hormones, vitamins and many compounds frequently used in tissue and cell culture applications. For this reason, ß-cyclodextrin is most commonly used as a complexing agent.